An event every year that begins at 12:00 am on day 13 of March, repeating indefinitely 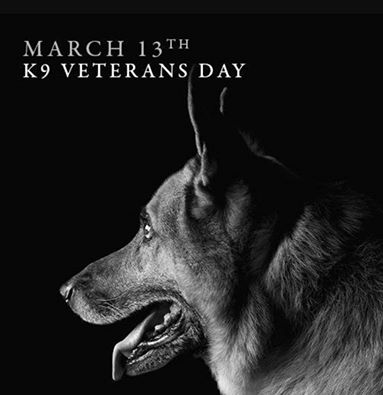 National K9 Veterans Day, March 13, is a day set aside to honor commemorate the service and sacrifices of American military and working dogs throughout history.

It was on March 13, 1942, that the Army began training for its new War Dog Program, also known as the “K-9 Corps,” according to American Humane, marking the first time that dogs were officially a part of the U.S. Armed Forces.

The rest, as they say, is history. Officially a part of the service of not, the dogs of war span centuries and include such heroes as Sgt. Stubby, the original war dog, Chips, the most decorated dog in World War II and Lex, who retired with his fallen owners family and Cairo, the Navy SEAL working dog on the bin Laden raid.

Today’s military dogs are valued as important members of their military units and even have their own retirement ceremonies, awards and medals and memorial services.