Two-thirds of Americans now support legalizing marijuana, the highest percentage ever in Gallup’s ongoing decades-long series of national polls on the topic.

The new survey released on Monday shows that U.S. adults back ending cannabis prohibition by a supermajority margin of 66 percent to 32 percent. That’s more than a two-to-one ratio.

It is the third year in a row that the firm, which has been polling about marijuana for 49 years, has found a record-breaking increase in support.

When Gallup first polled Americans on legal marijuana in 1969, just 12 percent said they were in favor. As recently as 2005, barely a third of Americans were on board.

Last year, the survey pegged legalization’s favorability at 64 percent. In addition to the two-point bump in support since then, opposition also decreased two percentage points from 2017′s level of 34 percent. 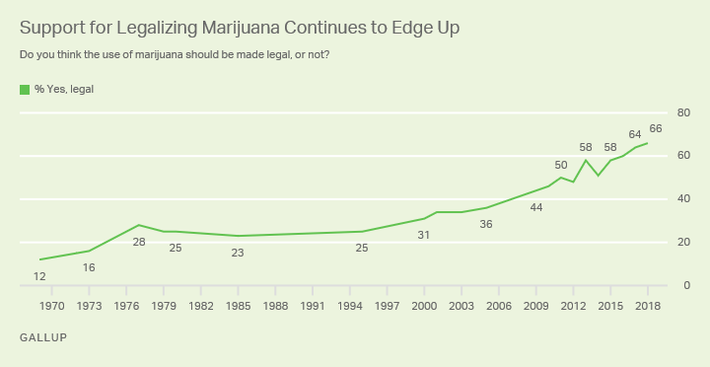 Support for legalization has spiked considerably in several key demographics over the past year. For example, there has been a nine-point increase among older Americans, with 59 percent of those aged 55 and over now saying it is time to end marijuana’s criminalization.

And Republican support is rising as well, with 53 percent backing legal marijuana this year as compared to 51 percent in 2017, the first year the poll found a majority of GOP voters in favor.

Just 45 percent of Republicans told Gallup this year that they oppose making cannabis legal, a four-point drop from 2017. Combined with the jump in those saying they favor the policy change, there was a net six-point swing in GOP attitudes toward marijuana legalization and away from prohibition over the past twelve months.

Legal marijuana support is also at an all-time-high among Democrats—75 percent—and independents, who are on board to the tune of 71 percent.

The poll also found that regional differences in attitudes about cannabis are starting to dissipate. People on the East Coast are now slightly more likely to back legal marijuana than those out West , with all areas of the country favoring the policy change at roughly the same rate—67 percent in the East and 65 percent in the each of the Midwest, South and West.

And there’s no sign the year-over-year increase in support is slowing down.

“Like support for gay marriage—and in prior years, interracial marriage—support for marijuana legalization has generally only expanded, even if slowly, over the course of multiple decades—raising the question of where the ceiling in support might be,” Gallup’s Justin McCarthy wrote.

Indeed, support is huge among younger Americans, with 78 percent of those aged 18 to 34 calling for cannabis to be legal.

“It is time for lawmakers to acknowledge the data-driven and political realities of legalization,” said NORML Political Director Justin Strekal. “It is time to stop ceding control of the marijuana market to untaxed criminal enterprises and implement common-sense, evidence-based regulations governing cannabis’ personal use and licensed production by responsible adults.”

“Our time has come,” he added.

The survey was conducted between October 1 and 10, prior to Canada’s cannabis legalization law going into effect last week.

“There is a growing sense among the U.S. population that it is time to end our nation’s failed experiment with marijuana prohibition,” Steve Hawkins, executive director of the Marijuana Policy Project, said. “There are not many issues out there that enjoy majority support among both of the major political parties and in every region of the country. This support is consistently translating into wins at the ballot box, and it should further motivate elected officials to take action at the state and federal levels. Hopefully lawmakers are paying attention to this clear trend in public opinion.”

“If they ignore these poll numbers, they do so at the risk of seeing a drop in their own,” Hawkins added.

The positive reports of legalization’s favorability come as several U.S. states prepare to vote on cannabis measures in November.