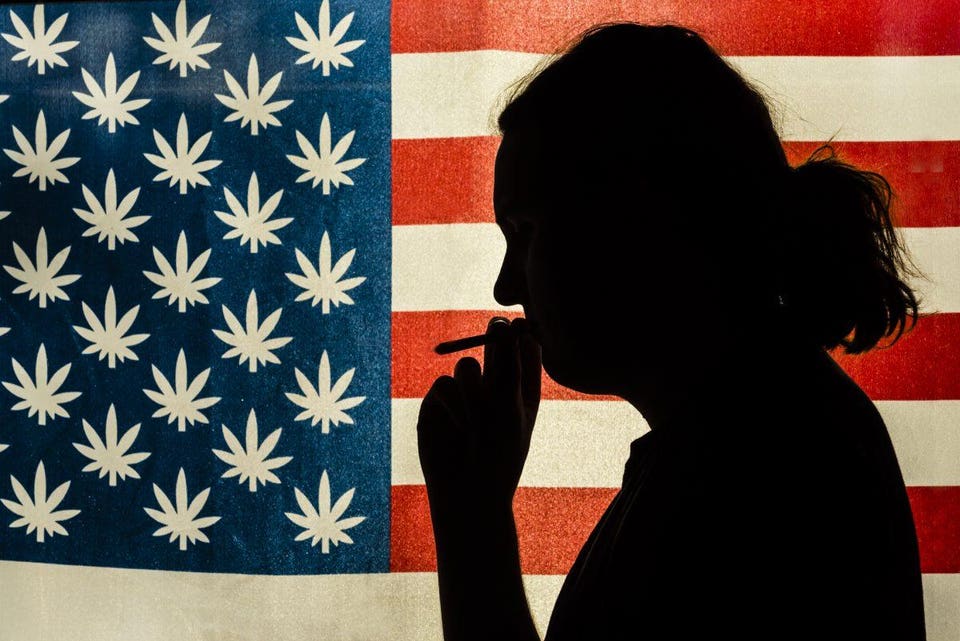 Studying cannabis is really, really, difficult in the United States.

Just ask Dr. Sue Sisley, who has spent the last ten years trying to complete the first clinical trial of cannabis use for PTSD in veterans. The study, sponsored by the non-profit Multidisciplinary Associations for Psychedelic Studies (MAPS), finished its groundbreaking research earlier this year after it was approved by the FDA all the way back in 2011. Dr. Sisley overcame multiple obstacles to complete the study, including being fired from her job at the University of Arizona.

“We are immensely grateful to all of the study’s supporters,” Dr. Sisley wrote in a press release announcing the study’s completion, “especially the veteran service organizations who helped us with patient recruitment. We are proud to have persevered through these regulatory hurdles independently of hospitals, universities, or the VA system.”

Dr. Sisley’s study represents an outlier for cannabis research, in part because it happened, and in part, because it was geared towards veterans using cannabis as a treatment—not as a disorder.

Last year, Rolling Stone laid out how absurdly difficult it is to do any research with cannabis, in spite of the DEA claiming they were “streamlining” the research application process. The DEA essentially changed the application from mail-based to electronic, but, as Rolling Stone lays out, all of the other obstacles remain for researchers: approval from three agencies (the DEA, FDA, and the National Institute on Drug Abuse) and extra barriers to procurement.

While various federal agencies hem-and-haw about a substance that over 60% of Americans support legalizing, veterans struggle every day and other countries like Canada and Israel are taking the lead on medicinal cannabis research. Even though dozens of states have legalized marijuana, and ten have gone as far as legalizing recreational adult use marijuana, veterans looking for care through the V.A. are being hamstrung by federal prohibition.

The U.S. Department of Veterans Affairs states on its informational page for Post-Traumatic Stress Disorder (PTSD) that “Marijuana use for medical conditions is an issue of growing concern […] There is no evidence at this time that marijuana is an effective treatment for PTSD. In fact, research suggests that marijuana can be harmful to individuals with PTSD.”

At face value, the V.A.’s stance may seem like a well-intentioned, if entirely over-protective, approach to medical marijuana. Beneath the surface, though, the V.A.’s reason for objecting fails under scrutiny. A 2018 review of five studies around veteran PTSD and medical marijuana use found that three of the five studies found—shocker—that “conflicting data exist for the use of marijuana for PTSD,” in large part, because, “current evidence is limited to anecdotal experiences, case reports, and observational studies.” Unless the V.A. can see into the future to read Dr. Sisley’s report, their argument that “there is no evidence” for medical marijuana use for PTSD patients is only true because there is so little U.S.-based research into medical marijuana.

As The Washington Post reported a few years ago, the dearth of methodologically-sound marijuana science is in large part because “scientists must rely heavily on self-reporting from patients, making it extremely difficult to know how much, how often or through what means subjects use marijuana — let alone what type of chemicals they’re ingesting alongside the drug.”

The bulk of the attention on veteran’s health centers around PTSD, but veterans suffer from disproportionately higher rates of other diseases, as well. Statistically, veterans had higher rates of cancer between 2015 and 2016, perhaps due to the exposure to carcinogenic and radioactive materials like “Agent Orange” in Vietnam and nuclear weapons. Furthermore, almost two-thirds of U.S. military veterans report chronic pain. Medical marijuana has a long history of helping treat these diseases, and it can provide a much safer approach to treatment than high-powered pharmaceuticals like opioids.

When it comes to mental health issues like PTSD and depression, the V.A.’s current go-to-treatment is known as the “combat cocktail,” a mix of anti-depressants that can have dire side effects if not administered correctly. The V.A.’s prohibition stance and reliance on antidepressants and opioids, however, is out of step with many veterans’ experiences and desires for treatment.

“More than two million veterans report using cannabis to treat their service-connected injuries according to surveys; anecdotally, hundreds of veterans have publicly testified that cannabis access has saved their lives after being driven to near-suicide under a pharmaceutical load of dozens of pills a day,” Eric Goepel, CEO and Founder of Veterans Cannabis Coalition told me. “Current research supports the potential efficacy of cannabis in dozens of different applications, all of which could have direct positive impacts on overall veteran health. Whether for pain relief, as a sleep aid, or for help in overcoming stress and anxiety, so many veterans find relief in cannabis because it provides an alternative way to manage their conditions far better than a slew of toxic pharmaceuticals.” 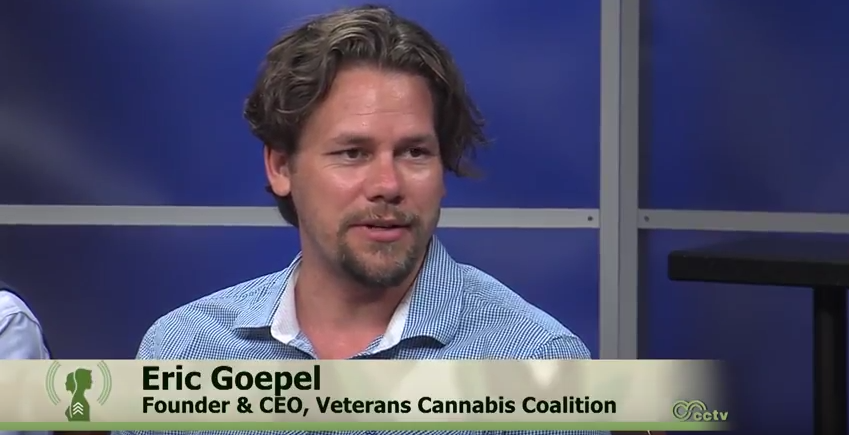 Speaking with The New York Times, Marcel Bonn-Miller, a psychologist who worked for years at the veterans’ hospital, highlighted the fundamental irony of the V.A.’s relationship to marijuana research: “We have a disconnect in care. The V.A. has funded lots of marijuana studies, but not of therapeutic potential. All the work has been related to problems of use.”

By working from the assumption that cannabis use is a disorder, the V.A. is ultimately creating another fracture in a broken system: the millions of veterans use cannabis are not able to integrate their cannabis use into their overall care plan with their doctors. As a result, the V.A.’s prohibition is driving a wedge between veterans who prefer cannabis to psychotropic pharmaceuticals and doctors who are not allowed to recommend or prescribe cannabis.

To illustrate how out-of-step the V.A. is with veterans, consider this recent survey from the American Legion: among veterans, 92% support research into medical cannabis and 83% support legalizing medical cannabis—a much higher rate than the broader populace.

When I spoke with Dr. John S. Abrams of Fireflower Technologies, Inc., he emphasized the importance of the DoD as a potential future partner for developing medicinal marijuana research: “When it comes to the medicinal application of cannabis, I think the Department of Defense has been very interesting pathways and opportunities compared to the civilian side. Things can go faster potentially within the context of the military for deployment. I’m a big proponent of making sure that we keep the Department of Defense and their protocols and platforms in place as we push for medicinal cannabis development.”

Veterans don’t just stand to benefit from the use of cannabis, but also from investing and working in the industry itself.

Dr. Abrams also sees the military’s training as a fantastic foundation for the burgeoning cannabis industry. “The military has this theme of train, train, train and replace. And I think that that’s immediately suited for the cannabis industry and for some of these processes that we need within the context of good manufacturing practice. Veterans already have a basis for good manufacturing practices that the marijuana industry needs.”

However, it seems that military personnel even being tangentially related to cannabis is a no-no, according to the Department of Defense. In March, the DoD began circulating notices that informed military officials that the “DoD Central Adjudication Facility [CAF] negatively views personal investment (i.e. stock purchases) in companies that manufacture/sell/distribute marijuana. This means your security clearance may be negatively affected if you own stock in such companies.” This stance creates an extra financial barrier for military officials who may not know whether the market index funds, mutual funds, and ETFs that they invested in contain cannabis stocks. (They probably do—cannabis stocks are exploding right now.)

For the veterans who have left the military health and finance system behind, these barriers can be more easily overcome. But for the millions of active duty and reserve troops and officials, the scientific blacklisting and broader cannabis prohibition in the lives of veterans has already wrought damage that will have repercussions for generations to come.

“The bottom line is that cannabis prohibition is killing veterans,” Goepel said, “through the stigma that prevents veterans from exploring cannabis as an alternative, through denying the medical value of cannabis and blocking research, and through criminalizing basic self-care. We need more than empty rhetoric—we need action now.”

Companies like Emerald Scientific are helping facilitate this charter in bringing the topic front-and-center at its prestigious Emerald Science Conference. The company issued $10,000 in funding from proceeds of its 1st annual Emerald Classic Charity Golf Tournament to the Veterans Cannabis Project (VCP). 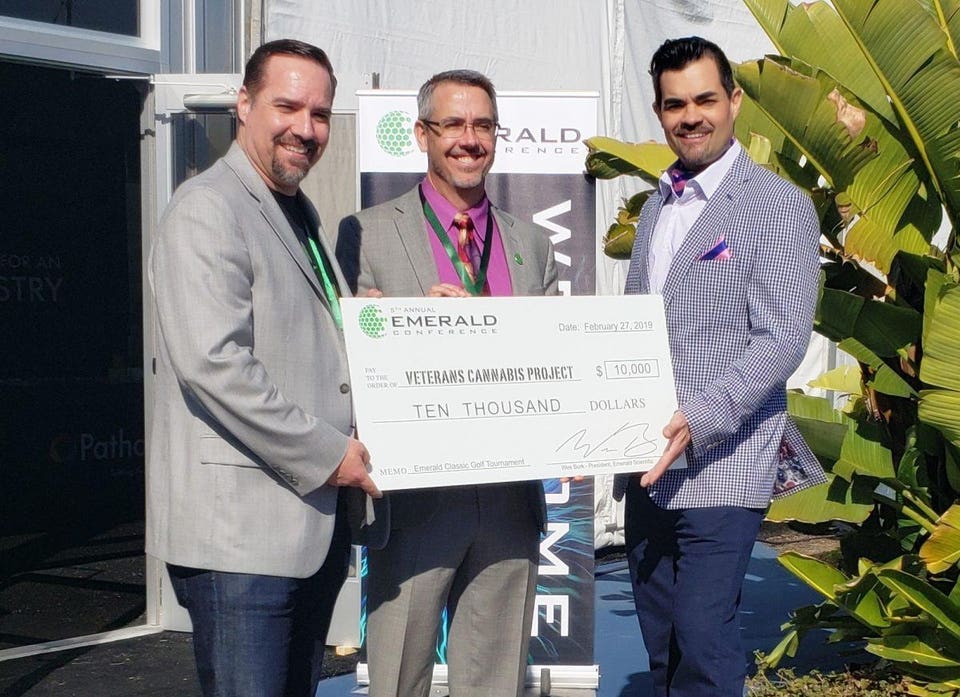 “Science has proven that cannabis has a wide array of medical benefits that can directly improve the lives of our veterans, however, we recognize the obstacles they face in accessing cannabis as a viable treatment,” Emerald Scientific President, Wes Burk told me. “Organizations like the Veterans Cannabis Project (VCP) take veterans to Capitol Hill to tell their stories, they educate them on how to navigate the VA when using cannabis, and they have introduced a protocol to the VA to treat traumatic brain injury in the field.”

Hopefully, one of the many marijuana reform bills that have been introduced in Congress will make its way through both houses in a bipartisan approval and change the way the V.A. treats cannabis use and open up researcher’s access to cannabis.

“Scientists, doctors, and your military veterans are screaming for leadership on this subject, in hopes that this plant might be taken seriously and given the deep scientific research it deserves,” Doug Distaso, executive director of the Veterans Cannabis Project said. “We hope that happens. Veteran lives depend on it. We are literally dying for it.”