There’s a very flattering photo of Jack Slivinski Jr. on the cover of a 2012 wall calendar produced earlier this year by a New York City-based publishing company.

The calendar is called Nation’s Bravest: Firefighters Unite and features a dozen professional firefighters from different U.S. cities all posing shirtless. Proceeds from calendar sales benefit selected charities in each of those cities. In Philadelphia, the money generated will go to a fund that supports the widows of firefighters who are killed in the line of duty.

Slivinski, a Mayfair native, is Philly’s representative. His broad, boyish smile easily distinguishes him in the cover photo, perhaps even more than his muscular chest and arms or his heavy-rescue gear do.

The glistening Logan Circle fountain on the Benjamin Franklin Parkway and a distant City Hall serve as a picturesque backdrop.

Yet, for all the aesthetic quality of that cover shot, it’s only two-dimensional. Jack’s parents — Jack Sr. and Gerry Slivinski — can’t help but recognize the irony in that, in light of the controversy that first swelled then burst over his participation in the project.

But regardless how the general public and perhaps even some in the Philadelphia Fire Department viewed Jack Jr., he was very much a living, breathing and feeling person. It was this three-dimensional Jack Slivinski Jr. who took his own life in June, just weeks after his 32nd birthday.

A number of issues weighed on Slivinski, according to his parents. As a young firefighter some eight years ago, Slivinski and a colleague got trapped in a house fire in Logan. Their supervisor, Lt. Derrick Harvey, rescued them, but lost his own life in the process. He was 45.

About five years ago, Slivinski married his wife Carla. They had no children and eventually separated.

According to Gerry Slivinski, her son was trying to reconcile with his wife when the calendar project developed and thrust him into an unexpected spotlight for unwanted reasons.

In April, Fire Commissioner Lloyd Ayers learned of the shirtless photos and transferred Slivinski out of his beloved assignment with Rescue 1, the fire department’s specially trained heavy-rescue unit. Slivinski’s father, who is also a firefighter, spent many of his 35 years on the job working in the same unit.

In explaining the disciplinary move to the news media, Ayers said that Slivinski failed to get official permission to appear in the calendar and that the project sold “sex” as opposed to “safety.” Amid public criticism, the department later reinstated Slivinski. But by that time the always-smiling firefighter had begun taking anti-depressant medications, his mom said.

Slivinski’s parents don’t claim to know why their son took his life. But they do understand a lot about what was affecting him at the time.

“How do you know what degree it affects a person? You don’t,” Gerry Slivinski said. “I know what he told me. I know what I saw. I know what was on the news. I know he was never in trouble before.”

If nothing else, young Jack Slivinski wanted to be like his father — just like him, in fact.

Jack Sr. and Gerry met in Wildwood when they were teenagers and were engaged as sophomores in high school, he at Father Judge and she at Roxborough High. They wed right after graduation in 1974.

Jack Sr. initially worked as a chemical analyst at Rohm and Haas. But he always wanted to be a firefighter. So in 1976, he took a pay cut and joined the department while also serving in the U.S. Marine Corps reserves.

Gerry Slivinski had her own specific plans.

“I always knew I wanted to have two healthy children and I was happy,” she said.

Daughter Jennifer was born in 1977. Jack Jr. arrived in 1979. They attended St. Timothy Parish School and were altar servers.

Following in his father’s footsteps, Jack Jr. attended Father Judge. He played lacrosse and graduated in 1997. He then served four years on active duty in the Marine Corps.

“That’s where he got his training. He was in nuclear, biological and chemical warfare,” Gerry Slivinski said.

Jack Jr. knew that his specialty in the Marines would help him a lot in achieving his ultimate career objective, working as a firefighter in Philadelphia’s Rescue 1. When his father left the unit to join Engine 36 and Ladder 20 at Frankford and Hartel avenues in Holmesburg, Jack Jr. filled his boots. Son also slept in his father’s old firehouse bunk.

“He really admired his father. He really looked up to his father, as he should,” Gerry Slivinski said. “And he was never in any trouble except for this thing with the (calendar).”

Jack Jr. wasn’t the greatest student, but he was “street smart” and studied hard, his mom said. In addition, he always lighted up the room with his infectious personality.

“He always had a smile on his face. And when he went into the Marine Corps, they tried to take it off but they couldn’t,” Gerry Slivinski said. “You’d sit with him for five minutes and you’d realize he was for real — just a good guy.

“My son was a combination of us. My husband is strong and my son was strong. And my son was more outgoing, like myself.”

He became quite the physical specimen, too, mainly because of the type of work he did and also because he liked to stay in shape.

“He always took care of himself. If he felt he was putting on too much weight, he would just stop eating the junk and get right back into shape,” Gerry Slivinski said. “He knew the rescue (unit) required that he be in shape, and he made sure he was.”

He was a slam-dunk for the shirtless calendar.

The person behind the project, Katherine Kostreva of On Point Publishing, has said that Slivinski was her choice for the cover before his untimely death. After his death, the Slivinski family insisted that he remain part of the calendar.

Gerry Slivinski is certain that her son’s participation in the project garnered it a ton of extra publicity and with it a lot more earning potential. Jack Jr. was the only guy punished by his own department for participating in the calendar.

Jack Jr. refused to back down.

“He decided to do the calendar and he did it. He wanted to support the widows and he did it,” Gerry Slivinski said.

“It’s not just beefcake, because of what they’re doing for the community. And if you see all the other guys, they’re in front of their firehouses and they have their captains or chiefs around them.”

Jack Jr. got no such support.

Before posing for the pictures and sitting for an accompanying Web site interview, he consulted with officials from his union, Local 22 of the International Association of Fire Fighters. But nobody thought to run it by the commissioner’s office. They didn’t think they had to.

His pictures weren’t taken in a firehouse. There’s no heavy equipment in them. Nothing in the pictures says “Philadelphia Fire Department.” Simply, he’s a firefighter from Philadelphia.

After transferring Slivinski, Ayers reportedly told the Daily News that the department has long been opposed to members posing for “beefcake calendars.”

“We don’t sell sex, we sell safety,” Ayers said, according to the newspaper. “That’s been our mantra for the longest time.

“We get letters from children. They look up to us. We cannot allow them to be showing nipples in photographs of Philadelphia firefighters.”

Slivinski’s parents say that Ayers’ justification rings hollow when you consider some of his own extracurricular activities.

Primarily, they point to a videotaped promotion he did for a North Philadelphia book and music store, Black and Nobel. The video was uploaded to YouTube in March 2010 and remains publicly accessible.

In it, Ayers is seen wearing his fire department uniform and espousing the merits of the store “for all of my intellectual sources, whether it’s video, tapes, music (or) a book that I have to have. It’s here and we need to make sure that we support Black and Nobel. That’s what it’s all about.”

It is not known if Ayers received compensation for the endorsement.

Gerry Slivinski claims that the store sells adult-themed and sexually explicit material that she argues Ayers should not be promoting, particularly within context of his position in the fire department.

Content posted by the store on its own Web forum seems to support her claims. One concert video shows a man performing a song called “Suck it or Not,” with lyrics in which he graphically describes his genitals. Another video shows an author promoting her book, A Woman Scorned: Revenge Served Sexy. The cover features a scantily clad woman holding a large kitchen knife.

“How can you say my son is selling sex when the commissioner is selling that?” Gerry Slivinski said. “Maybe the videos weren’t X-rated, but they’re still selling sex.”

Ayers did not respond to requests for comment as the Times went to press.

Both Gerry Slivinski and her firefighter husband think Ayers should resign or be relieved by Mayor Michael Nutter.

“If you say to your men, ‘I don’t want you to do this,’ that’s OK. But you have to be fair,” Gerry Slivinski said. “You’re dealing with men who will put their life on the line, but you have to earn their respect.”

“We’re united in the fact that this shouldn’t have happened,” Jack Slivinski Sr. said. “I don’t like the way he treated my son and the double-standard.”

Now, they continue to struggle with questions, uncertainty and emptiness.

“He was his own person and he was very loved,” Gerry Slivinski said. “He didn’t need to live up to everything, but he did and he succeeded and I was proud of him.” •• 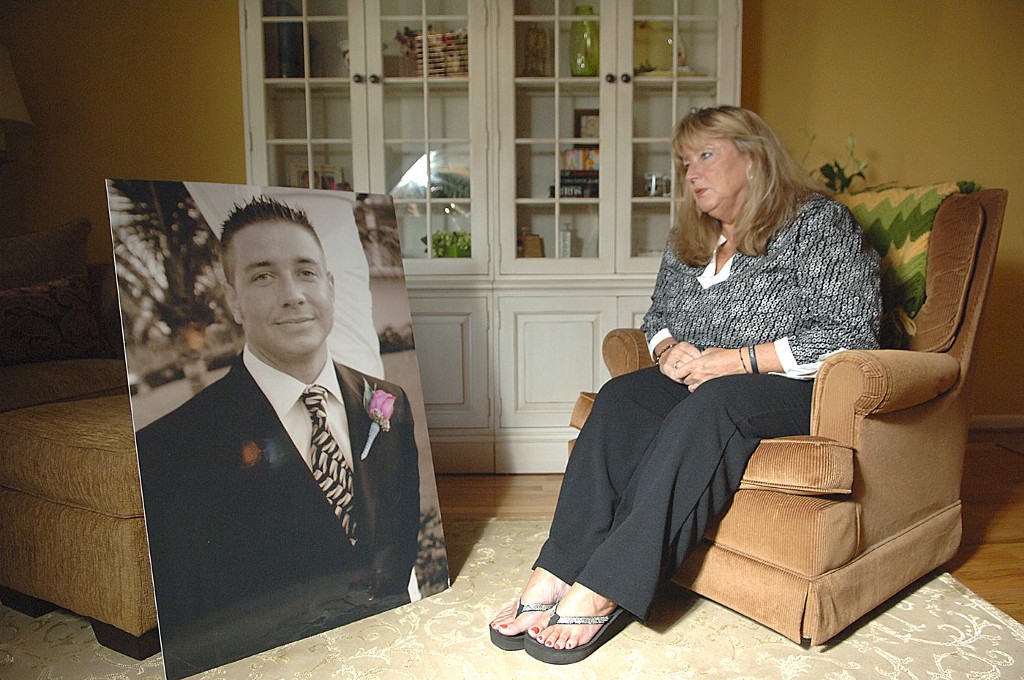