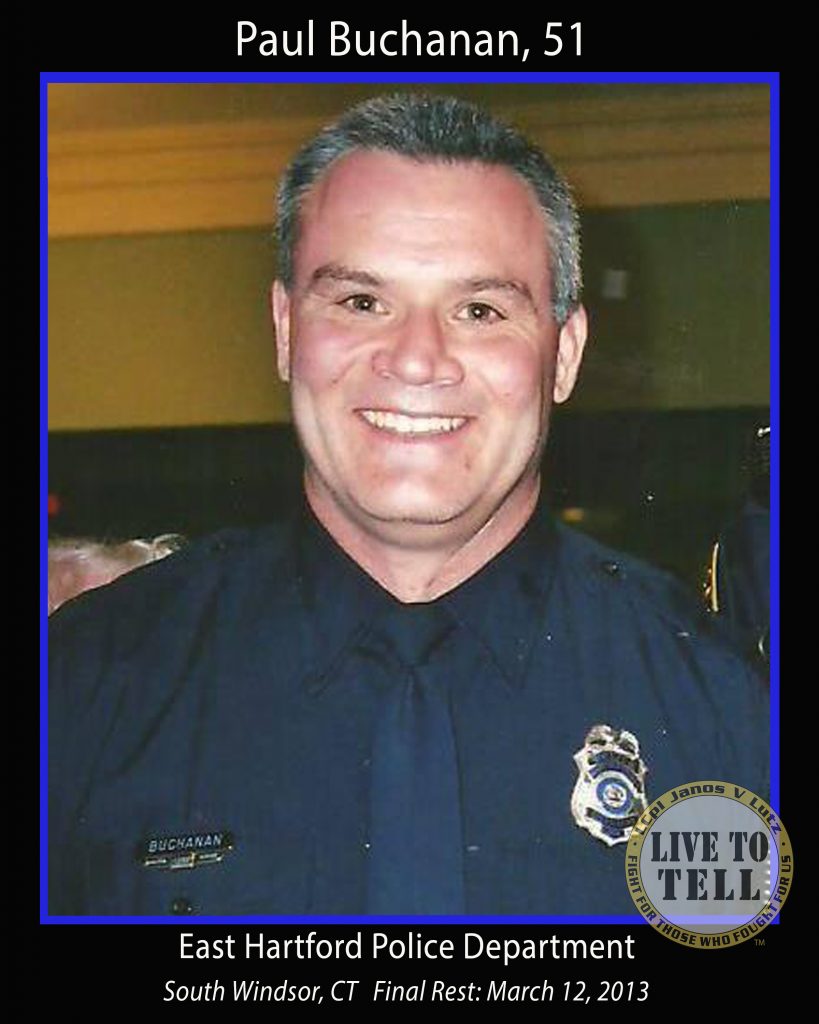 Paul Buchanan, loving and devoted husband and best friend of Patricia (Oborski) Buchanan went to be with our forgiving Lord Jesus Christ on Tuesday, March 12, 2013, in East Hartford.
Born in Hartford on September 1, 1961, son of Lea (Cavalieri) Buchanan of Rocky Hill and the late James Buchanan, he grew up in Hartford and lived in South Windsor since 1994. For the past 24 years, Paul served the community of East Hartford as a police officer with a smile and a sense of humor. He would do anything for anyone. He was humble, fair, protective, giving, respectful, honest, caring, courageous, loyal and passionate, as well as a resourceful hard worker. He never complained. He was a highly respected Officer and enjoyed helping others. In 2008 he was the recipient of the “East Hartford Police Officer of the Year” Award and received other awards for saving residents of East Hartford. He was a friend to all. Paul was intrigued by outer space, and he enjoyed history, weight-lifting, sports, listening to The Beatles and spending time with his precious family. His family was his greatest joy. Paul and his family are members of Wapping Community Church in South Windsor.
In addition to his wife and best friend of 29 years, Trish, he leaves two devoted and loving sons, Jared and Benjamin Buchanan, his cherished Bichon Frosty, his mother, Lea, a brother, Phillip Buchanan and his wife Rochelle, three sisters, Laura Kearney, Vivian Wotton and her husband Cleve, and Diane Westbrook and her husband Kirk. He also leaves many wonderful in-laws, nieces, nephews, cousins, aunts, uncles, fellow brother officers and special friends. He was predeceased by his father, James Buchanan, and a brother-in-law, John F. Kearney.