The Westport Police Department today announced the ”untimely death” of Sgt. Robert Myer, 48, a 23-year member of the force.

According to a news release from the Newtown Police Department, where Myer lived, police were called to his home at 6:42 a.m. “for a medical assist and then determined that it was an untimely death.”

Myer, who was a member of the Newtown Police Department Board of Commissioners, was widely known to many Westporters, where he grew up. His late brother James was a 30-year Westport firefighter.

“The medical examiner’s office will determine the cause of death,” Newtown police said, adding, “There is nothing criminal at this point.”

“We’re an organization that’s heartbroken,” said Police Chief Foti Koskinas. “We’re heartbroken for our department and for his family. For us it’s like losing a relative.”

Myer leaves behind a wife, three children, and two stepchildren.

“It was with profound sadness that I learned of Sergeant Myer’s passing,” said Westport First Selectman Jim Marpe in a statement. 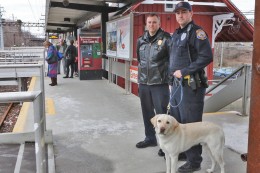 Sgt. Robert Myer (l) and Officer Jim Baker with police service dog Chase wait to board a New York-bound train in March at the Metro-North Green’s Farms station as part of stepped up security on the railroad. (CLICK TO ENLARGE) Dave Matlow for WestportNow.com

“He represented the Police Department and the Town of Westport with utmost professionalism and honor. Our focus now is to support his fellow police officers at this difficult time. And I respectfully request that all Westporters do the same.”

A Westport Police Department statement said: “Sgt. Myer served the Westport community, his hometown, with honor and distinction for more than 23 years.”

It said he first joined the department as an intern in 1991 and was hired as a fulltime officer in 1992. He was promoted to the rank of corporal in 2014 and to the rank of sergeant in 2015.

Upon receiving this promotion, he was assigned as a supervisor in the Patrol Division.

In addition to his regular assigned duties, he served as a member of the Southwest Regional Emergency Response Team as a crisis negotiator, was a member of the Westport Police Department Crisis Intervention Team, the WPD Marine Division and WPD Honor Guard.

He received numerous awards throughout his career as well as dozens of letters from citizens thanking him for his assistance and dedication. 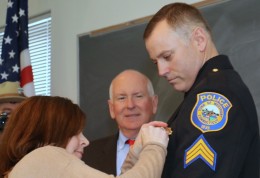 Robert Myer was promoted to sergeant in December 2015. (CLICK TO ENLARGE) Dave Matlow for WestportNow.com

In the statement, Koskinas said, “Regardless of his assignment, Sgt. Myer always served our community to the best of his abilities. Bob will be greatly missed. Our deepest sympathies go out to his family and we again ask that you keep them in your thoughts and prayers during this extremely difficult time.”

Easy going and always with a quick smile, Myer was the youngest of six children of the late James and Evelyn Myer.

He followed in the footsteps of his late brother James E. Myer, Jr.,in serving his hometown. James died in 2014 at age 58 after serving 30 years as a Westport firefighter. (See WestportNow Nov. 14, 2014)

He graduated from Staples High School and Sacred Heart University.

A Mass of Christian Burial will be celebrated on Tuesday, May 10 at 11 a.m. at St. Rose of Lima Church, Church Hill Road, Newtown. Interment will be private.

The family issued the following obituary:

Robert A. Myer, 48, beloved husband of Elizabeth (Studley) Myer, died unexpectedly on May 4 at his home in Newtown. Bob had been a resident of Newtown for the past 11 years and grew up in Westport.

He was born on Sept. 11, 1967 in Norwalk, the son of the late James and Evelyn Link Myer. He was a graduate of Staples High School and Sacred Heart University.

Bob served the Westport community, his hometown, with honor and distinction for more than 23 years as a member of the Westport Police Department.

Upon receiving this promotion he was assigned as a supervisor in the Patrol Division. Bob loved police work and most recently served as a member of the Newtown Police Commission.

Besides his wife, Beth, he is survived by his beautiful daughter, Lindsay, along with daughter Amber and son, Robert, Jr. as well as step children, Emily and Brian Montoya. The youngest of six children, he is also survived by three brothers, Edward (Gail), Richard (Laura) and David (Karen) and a sister Elizabeth Petroni (Kevin). His brother, James (Laura) predeceased him. Bob also leaves behind six nieces and nephews.

An avid outdoorsman, Bob loved nothing better than patrolling Long Island Sound in the Westport Police cruiser or leading the Westport dive team when called upon. He was also an excellent and talented carpenter who loved to work with his hands.

The family will receive friends at the Honan Funeral Home, 58 Main Street, Newtown on Monday, May 9 from 4 to 8 p.m. A Mass of Christian Burial will be celebrated on Tuesday, May 10 at 11 a.m. at St. Rose of Lima Church, Church Hill Road, Newtown. Interment will be private.

ADD YOUR LOVED ONE TO THE WALL