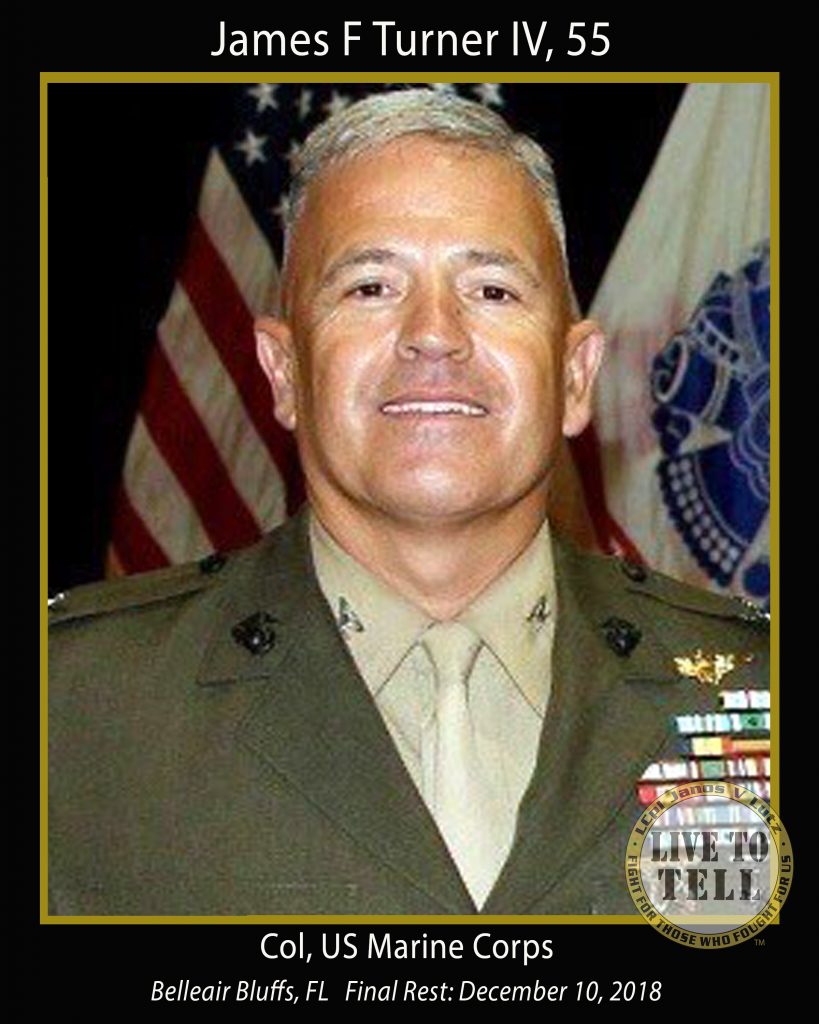 ST. PETERSBURG — On Dec. 10, retired Marine Col. Jim Turner put on his dress uniform and medals and drove to the Bay Pines Department of Veterans Affairs complex. He got out of his truck, sat down on top of his military records and took his own life with a rifle.

Aside from leaving behind grieving family and friends, Turner, 55, of Belleair Bluffs, left behind a suicide note that blasted the VA for what he said was its failure to help him.

“I bet if you look at the 22 suicides a day you will see VA screwed up in 90%,” wrote Turner, who was well-known and well-respected in military circles. “I did 20+ years, had PTSD and still had to pay over $1,000 a month health care.”

Turner’s death marked the fifth time since 2013 that a veteran has taken his life at Bay Pines. There were more suicides there during those five years than at the rest of the VA hospitals in the state combined. There were none at the James A. Haley VA Medical Center in Tampa.

It’s unclear how many other veterans killed themselves during that period at VA facilities around the nation. The government’s second-largest bureaucracy declined a federal Freedom of Information Act request by the Tampa Bay Times for that information last year. In an email Friday afternoon, VA spokeswoman Susan Carter said the agency only started collecting the information a month after the denial.

From October 2017, to November 2018, there have been 19 suicide deaths at VA facilities around the United States, Carter said. The vast majority of veteran suicides are off campus and 70 percent of those who take their lives hadn’t sought treatment from the VA, according to VA statistics.

As for why it keeps happening at Bay Pines, officials there say they don’t have an answer.

Long before he became a statistic — one of 20 veterans who die by suicide every day — James Flynn Turner IV was a young man from a wealthy Baltimore family who joined the Marine Corps and reveled in his service to the nation.

“My brother’s identity was being a Marine,” said Jon Turner.

Jim Turner flew F-18s and then became an infantry officer, taking part in the invasion of Iraq in 2003. He later served in Afghanistan and spent a decade working at U.S. Central Command at MacDill Air Force Base.

He left “an enduring legacy of professionalism, commitment and superior leadership which served as a guiding force for all service members whose lives he touched,” said Edward Dorman III, a recently retired Army major general who worked with Turner at Central Command for a decade. “That’s a life worth emulating.”

When Turner retired, he lost his identity and began to struggle, his younger brother said.

Those problems exacerbated some of the mental health issues Turner was experiencing from his time in the Marines, said his ex-wife, and led to the dissolution of their 27-year marriage,

“He came home seemingly fine,” said Jennifer Turner. “It was a couple of years later that he just got more aggressive.”

It was never anything physical, she said. “He just got agitated very easily. He had nightmares, where he would wake up screaming military stuff.”

The problems reached a crescendo as Turner was retiring in 2015, his ex-wife said.

The couple decided to separate. In January 2016, while Jennifer Turner was out of town, Turner grew angry at his son and chased him out of the house with a gun. Pinellas County Sheriff’s deputies responded and detained him under the state’s Baker Act.

Jennifer Turner believes her ex-husband may have taken his life because he was refused treatment at Bay Pines. Both she and Jon Turner say it was quite possible he became frustrated with having to wait and left without being helped.

Others who lost a loved one to suicide at Bay Pines have different theories on why they chose to end their lives there.

Vietnam War Navy veteran Jerry Reid, 67, may have driven to the VA to take his own life on Feb. 7, 2013, because he lived alone and didn’t want to have his body found weeks or months later, said his friend, Bob Marcus.

Joseph Jorden, 57, a medically retired Army Green Beret, likely took his life at Bay Pines on March 17, 2017, not because of poor treatment, but because he felt safe there, said his brother, Mark Jorden.

But Gerhard Reitmann, 66, who served with the Marines in Vietnam and later as a guard for President Richard Nixon at Camp David, “felt like the VA wasn’t really taking care of him” when he ended his life at Bay Pines on Aug. 25, 2015, said his brother, Stephan Reitmann.

The mother of Esteban Rosario, 24, who ended his life at Bay Pines on May 8, 2013, could not be reached for comment.

Regardless of why he took his own life, Turner left behind family and friends, many of whom gathered for a memorial service Friday afternoon in Largo, still struggling with the aftermath.