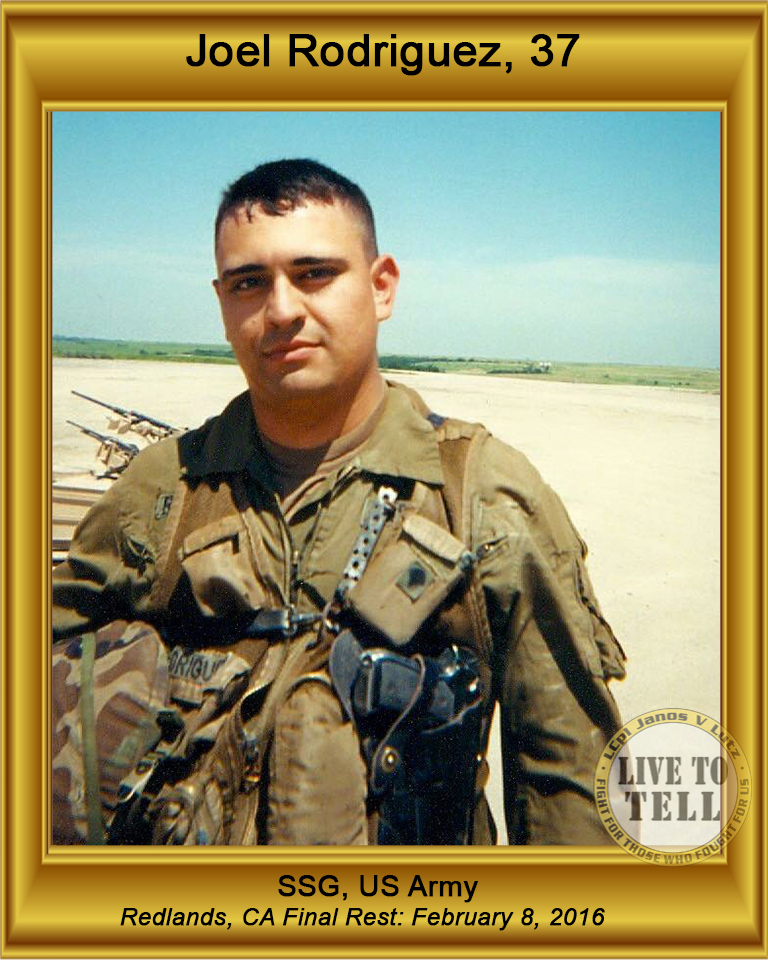 Joel Rodriguez was born October 27, 1978, when the delivering doctor spanked him to hear him cry and breathe, he said, ” another soldier for America”, my mom will never forget those words spoken that day. Joel always wanted to be a soldier, but he also loved the idea of being in law enforcement. He always wanted to “get rid of the bad guys” he would say. Joel served 3 tours, one in the Persian Gulf and 2 in Iraq. When we look at pictures of Joel, his best moments were around his battle buddies, his brothers in arms. In those pictures shared among friends he has a sparkle in his eyes, big innocent smile, and big brown eyes full of hopes and dreams. I have a collection of letters written from Iraq, in it he details his love for his family, his mother most of all, the woman that “will always love me no matter what”, he said. The siblings he misses fighting over the remote control with, and his niece Lexzy that he referred to as, my best friend, he talks about taking her to Disney because uncle Joel wants to spoil her. Joel earned many medals and ribbons, among them The Purple Heart, he got hit by an IED and never fully recovered, physically and mentally. He was diagnosed with PTSD, TBI, anxiety, among with many physical health issues, he was honorably retired for his disabilities,and he tried really hard, he fought a hard battle at home, a battle he wasn’t trained to fight in the military. He suffered in the hands of an abusive marriage, pressure to keep up appearances, pressure to pretend nothing was wrong with him, financial stress, among everything else that he was diagnosed with. My brother lost his battle on that fateful day in February, we didn’t get to say goodbye, or farewell, we didn’t get a hug, or a smile, not even a note. This has been the absolute worse pain of our lives, especially our mother’s. We all miss his big bear hugs, his big brown eyes, his voice, him getting mad because we put him in group messages, the way he cared and loved, he loved so deeply and cared deeply, and his legacy will never be forgotten. When we talk to his friends, it’s very clear to see that SSG Rod left a permanent mark in their hearts.